The Roth IRA Has an Undo Button? 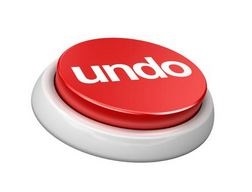 Actually by do-over, we’re referring to what the IRS calls a recharacterization. This means you can “undo” or “reverse” a rollover or conversion to a Roth IRA. Sometimes there are reasons to do this. Take Unlucky Louie for example, his winning Lotto ticket blew out the car window, he had an emergency root canal on the day of his wedding, and he converted money to his Roth IRA just before the market crashed. Poor Louie would have been much better off to pay the tax on the conversion AFTER the market crashed. In this case, even Unlucky Louie can undo the transaction as if it never happened. This is done by telling the trustee holding his Roth IRA to transfer the amount to a traditional IRA. If he does this by the due date of his tax return (including extensions), he can treat the rollover or conversion as if it never happened.

The way this works is money rolled to a Roth IRA from an employer plan can only be recharacterized by transferring the money to a new or existing traditional IRA. So you can still recharacterize, you just can’t put the money back into the original plan where it came from. This will work too, you’ll be fine.

Is there a Deadline to recharacterize?

There is, you generally have until October 15 of the following year to recharacterize.

One more thing, there is a minimum waiting period if you want to convert that same money again later. If you undo or recharacterize a rollover or conversion to a Roth IRA, you’re not allowed to reconvert the same money again until 30 days after the recharacterization, or the year following the year of the rollover or conversion, whichever is later.

The waiting period to convert is only for amounts you recharacterized. So this means you can still convert amounts from other traditional IRAs to a Roth IRA immediately.

Remember, we help our clients decide if they should consider recharacterizing or undoing these transactions and why. If you would like more information on how this works just call us at 815-455-6453.